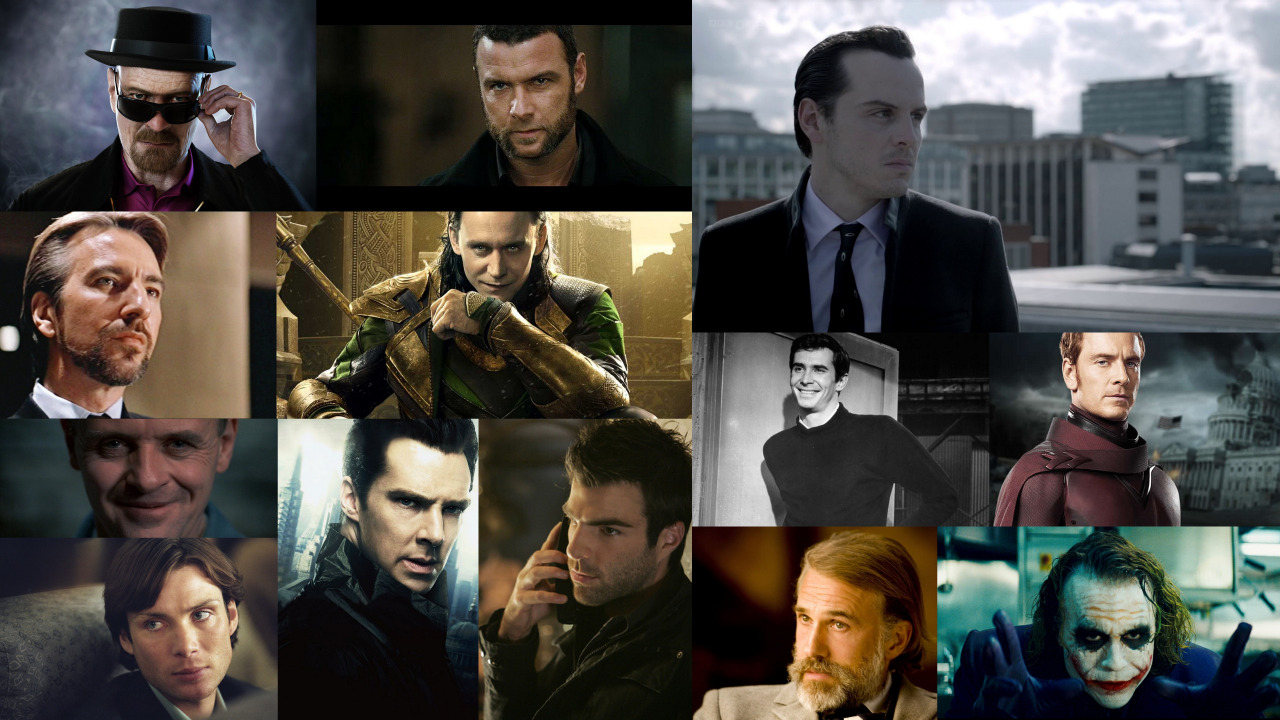 Onscreen sinister is sexy, whether we care to admit it or not.  Villains in TV and movies are fascinating to watch; you can’t take your eyes off them.  (Casting may help, true, but Hannibal Lector is entrancing played by Mads Mikkelsen, Anthony Hopkins, Brian Cox, or Gaspard Ulliel.)  But why?  Why do so many of us fall for the villain even when he or she is so…well…villainous?

Please note: I’m not talking about the villains in slasher films like Jason Voorhees or Freddie Kruger, but the ones that lean towards sane, sober, and sociopathic; the ones that could actually exist, in one form or another, in the real world.

Cleverness: Never seen a good old-fashioned villain without a great amount of intelligence.  Makes sense, sociopaths tend to test above average on IQ tests and have a unique read on situations and people that can make them seem like geniuses.  On screens big and small villains are shown exercising their brilliance whether by orchestrating murders, forcing heroes to solve multiple puzzles to save others, or even getting people to question their own sanity.  It isn’t so much the things they do that we enjoy, but that they can do them…they’re clever enough to organize and execute these grand schemes.  In Nightcrawler the protagonist (but no less villainous) Louis Bloom is able to cleverly navigate his way from thief and amateur videographer to the leader of a fast-growing freelance videoing company for L.A.’s local news…the things he does to get there are pretty awful, but one can’t help but admire the skill with which he does them.

Showmanship: What’s the use of intelligence if you don’t show it off?  Steal the Crown Jewels, have high society come to a dinner of your victims, get away with multiple murders, or just blow some shit up!  Even the more subtle types have their moments: Game of Thrones’ Littlefinger goes bold in pulling his knife on Ned Stark and shoving Lysa Arryan to her death.  Villains do some outrageous things, sometimes successfully and other times not so much, but either way the audience gets a great show.  In the words of Batman Forever’s The Riddler “[Two-Face’s] entrance was good, [Batman’s] was better.  The difference?  Showmanship!”

No Fear: Pretty much everyone feels fear, it’s part of human nature.  It’s what kept us alive when we were running around the wild in nothing except fur pelts and still keeps us safe now.  It’s also something sociopathic villains tend not to experience or hold strictly in check if they do.  No running around screaming in panic for these ladies and gents; they face danger, even death, with their middle fingers raised high and a smirk on their face.  When pinned precariously at the railing of a bridge in BBC’s Luther Alice Morgan responds in an almost placid voice: “So go on…Kiss me.  Kill me.  Do something.”  And then there’s Jim Moriarty who, after realizing what he must do to win, blows his own head off.  He’s not scared of death, he accepts it and uses it as a final move in his battle of wits against Sherlock – an act that startles the typically unflappable Holmes.

Wish Fulfillment: Ever wanted to punch your boss, key your ex’s car, or tell some obnoxious loudmouth in a theatre to shut up?  If you’re like most you ultimately backed out, but these villains wouldn’t…or, if they did, it’s only because there’s something far worse/more aggressive planned – like Hannibal who kills and eats those who offend his sensibilities.  Most people care about appearances, the legality of acts, or (if nothing else) their own safety and keep their impulses in check.  Sociopaths don’t really have that same sense of care and villains certainly don’t.  So the Average Joe or Jane can watch a show or film and revel in a villain cutting someone down – whether verbally, psychologically, socially, physically, or a variant of the four – without any risk to themselves or their reputation.  They get the vicarious thrill of power, winning, and revenge as they watch; they see Khan crush an enemy’s skull and, however subconsciously and briefly, imagine the skull of their own enemy.

Your Fear: Biological reactions to fear and sexual activity have some overlap: Increased pulse, labored breathing, wide eyes, open mouth…the description covers both.  Two chemical releases – norepinephrinee and dopamine – occur in both resulting in an adrenaline rush.  It’s why we go on roller coasters and in haunted houses, to get that rush, because sometimes fear is fun.  Why do you think a scary movie is suggested for date night by those trying to get lucky?  It’s not just that the date might jump into their arms or lap.  Villains do the same; when they make a sudden attack or hold people hostage in a tense kidnapping or standoff they give us that rush of excited fear without any actual risk to our safety.

Charm: If you are charming it pretty much means you’re likable.  Good, evil, or somewhere in between, others tend to want to be around the person who’s friendly and complimentary.  Even when certain people seem fake about their kindness they’re more tolerable than the pessimistic grump.  Along with charming many of the onscreen villains tend to be amusing – whether intentionally or simply by being their own twisted selves.  Between a serious, stern, hero and happy-go-lucky, warped, villain people might just go with the villain.