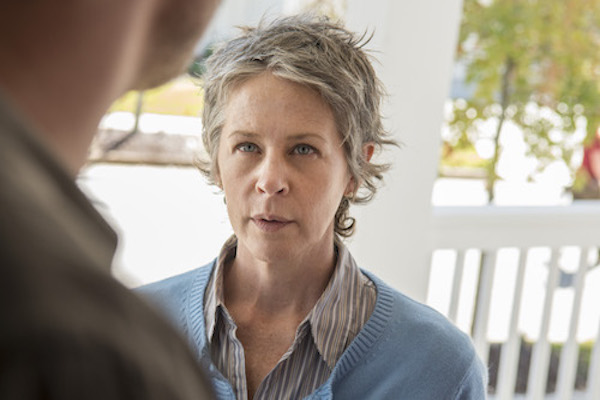 It takes a special kind of woman to be as tough as the men and in pop culture it takes one with a traumatic past.  Something that’s hardened her enough to hang with the guys, do a “man’s” job, and perform those tasks most often considered masculine in nature.  The trauma itself is not always the same – domestic violence, sexual abuse and rape, the death of a parent at a very early age – but the results are.  Someone tough and determined enough to live and succeed in a male-dominated world, but never without some terribly painful past that underlines she’s still the “softer” sex.

There is little known about Carol’s past before the Walker-apocalypse, but the moment you see her in The Walking Dead you know she’s a victimized woman.  Her husband, Ed, is a brute who shows little kindness to his wife or daughter (Sophia) even as strangers are pulling together for survival.  He doesn’t hesitate in hitting Carol, roughly dismissing Sophia, or even lashing out aggressively towards others…add to that Carol later mentioning his tendency to “look” at their preteen daughter and it causes a shudder to think what he was like behind closed doors.  It’s clear the Peletier house was neither a happy nor safe one.  As the first two seasons progress the traumas compound for Carol with first Ed dying (though that one might’ve been a relief) and then Sophia going missing only to be found as a Walker locked up in a barn days later.  It’d be enough for anyone to fall apart, but Carol is a woman forged in fire.

Six seasons in Carol is one of the most dangerous characters on the show.  She’s the one who does the things others would (at the very least) hesitate over.  She’s Rambo in a pastel shirt and matching cardigan doing whatever it takes to ensure her and her loved ones’ survival.  Over the years she’s killed innocent people and single-handedly taken down entire communities.  Would this new, badass, “Scarol” be around if she hadn’t lived with a man like Ed for (I’m guessing) more than a decade beforehand?  Possibly…But even the actress, Melissa McBride, confessed that one of the reasons Carol is so good at surviving in the zombie apocalypse is because she had a lot of practice beforehand.  Living in Ed’s household she learned how to protect herself and her daughter by keeping a low profile and having to constantly assess, then diffuse, dangerous situations.

Agent Starling didn’t have an abusive childhood, but she did have a rough one.  A worshiper of her sheriff father her world falls apart after he’s shot on the job.  She watches him cling to life for weeks before finally succumbing to his injuries, then she’s shipped off to her uncle’s farm in Montana.  There Clarice is further traumatized by witnessing the slaughter of Spring lambs causing her to attempt to free them, running off with one only to be caught and ultimately sent to an orphanage.  These things shape her both in her need to save and her tough exterior.

The Silence of the Lambs film goes to fair lengths to show just how physically small Clarice is compared to her male FBI cadet counterparts, but also her ability to take their hits without being moved.  Without much strain she keeps pace with and, according to her teacher/boss Jack Crawford, surpasses many at the academy.  It’s made very clear that she’s one tough lady before she’s ever sent out to interview Dr Lecter and she’s the only one mentally strong enough to have any kind of affect when she does interview him.  Clarice is so determined to become an FBI agent and save others there’s the suggestion that she’ll do whatever she needs to; share personal stories with Lecter, stand up against all the male superiors around her, and take on (and take down) a serial killer alone.

Like Clarice, Ani loses a parent early in her life with her mother’s suicide.  Her father stays in the picture as a hippie who raises his two daughters in a small commune – one that Ani says had four other group members she was part of; two of whom went on to commit suicide and two of whom ended up in prison.  While that alone may qualify as trauma things get worse for Ani when, at about age ten, she’s lured into the wilderness by a pedophile drifter.  While she blocked out most details of the assault Ani knows that she was missing for approximately four days and she willingly went with the man initially.

The result is a young woman ready, willing, and able to make any man who touches her bleed out in under a minute.  Ani isn’t the skittish, jumpy, female victim though; she’s the gravelly-voiced, e-cig smoking, combative, detective running raids and sleeping with her coworkers like so many of her male pop culture counterparts.  She’s trained herself to take down men physically and verbally (even when they try to compliment her) and comes off as almost eager to push back against anyone that suggests she soften her personality.  Ani’s been a victim in the past, she’ll be damned if she becomes one again.

Claire is probably the clearest example of early trauma equals tough woman.  The truth is there’s little known about her past outside the fact that, in college, she was raped.  A trauma that is clear and undeniable – just like her generally cold demeanor throughout House of Cards – and one of the only things that seems to jar her.  Seeing the man again years later is able to throw her off her usual calm presentation enough those around her take note.  Discussing it with her husband, confessing to the feelings of helplessness it caused, leaves Claire truly shaken for the first time on the show.  She basically says that the event is one of the key contributors to her hardened shell as, after the incident, she swore to herself never to let anyone make her feel that powerless again.

While the connection between trauma and toughness is always made clear, how the women and their traumas are handled differs slightly.  Carol and Clarice are first shown as women, then as strong; Ani and Claire are first tough, then women.  Carol’s introduced as an abused wife, loving mother, and generally caring person…it’s only over time that she grows into the badass “Scarol” that fans now love and admire.  Clarice is shown as smaller and thus implicitly weaker than nearly every male around her so that the fact she is there, unwilling to be pushed aside, and able to achieve what others aren’t – a report with Hannibal, stopping the killer, saving the girl – shows her strength.

On the opposite end Ani comes on the scene as a hardened detective raiding a house.  She is combative towards most and when a male detective, Ray Velcoro, suggests she soften (“haven’t you ever heard you get more flies with honey?”) she gives a snarky rebuff (“what the fuck do I want with flies?”).  It isn’t until she goes undercover towards the end of the season that her gender is displayed – now she’s dolled up in makeup and a sexy dress, now she’s put-upon (made to do drugs, touched and drooled over by men twice her size).  Even after she fights back her feminine side is exposed as she reveals her traumatic past to her new lover, Ray Velcoro.  Like Ani, Claire is first and foremost strong.  Cool, calm, and collected, very little ever rattles Claire as, like her husband, she manipulates her way up the political ladder with no real remorse for those she leaves crushed in her path.  Even more than Ani Claire has the potential to come off as a real bitch to the audience…then she goes to an awards ceremony and comes across her rapist once more.  The icy exterior melts and Claire is distinctly female complete with angry husband swearing vengeance who she must soothe into a clearer mindset.

These aren’t the only strong women with traumatic pasts, just a small sample in the wide world of pop culture (books, TV, film, comics, and beyond).  The concept is so prevalent it’s a trope; something that occurs so frequently across the spectrum of entertainment media that it is expected.  It’s hard to find a female character without a hauntingly painful past, as if one can’t exist without the other.  If there’s a strong woman, a woman who kicks ass and doesn’t care what those around her think, you can bet good money she’s got a traumatic past.

One thought on “Tough Women Have Traumatic Pasts”