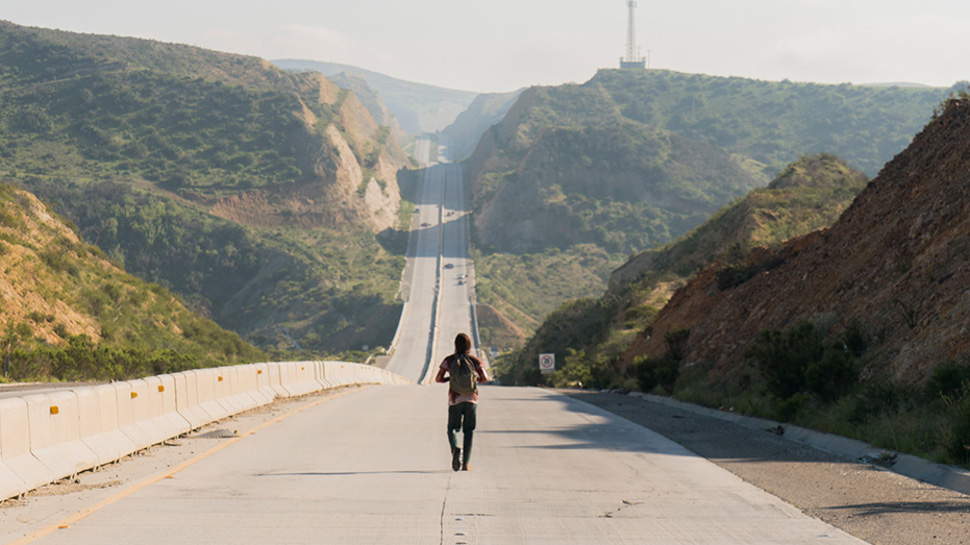 Remember when everyone on Fear the Walking Dead was stuck on a boat and pirates were trying to take all their stuff?  Or they were all in a villa run by a crazed housekeeper who believed the undead were just the next step in living?  Yeah…those good times are pretty clearly over.  Everyone’s splintered and if the mid-season premiere is any indication, their lives are going to be a series of terrible experiences from now on.

Nick is the sole focus of “Groteque” as we follow him on the worst road trip ever to Tijuana.  He starts in a small, abandoned, house with the last two standing from Celia’s cult of the undead: the woman who insisted the Abigail group give up their weapons and the boy we last saw speaking to his undead mother in the wine cellar.  The woman intends to take the boy in search of his father and while she offers to let Nick join, he refuses saying he’d like to find more like-minded people…those who don’t believe the Infected are what they are.  After a few vague directions and the most basic of supplies from the woman they part and Nick is left to walk Mexico alone.

Pretty much from the start things go wrong.  He finds a place to crash only to be woken by a bat-wielding woman who proceeds to beat him while her terrified daughter looks on.  Nick attempts to apologize, explain, and grab his supplies, but fails.  He flees into the night and continues on without supplies, but still a foolish determination.  I say foolish because there are a few instances in which he comes across various vehicles and other areas of potential, yet doesn’t rummage for something to eat or drink.

Eventually he makes it to a serious multi-car accident and finds a bit of water, but not much.  He also finds a radio, which he slap-fights an Infected to get to, but it only gives off static.  Honestly, I’m not sure why he bothered since the last time a radio worked Alicia accidentally drew pirates to the Abigail and getting the wrong people’s attention is something he should want to avoid.  But that’s just what he does as he sets the still-on radio aside when three armed men approach and it begins to make massive amounts of noise.  Rather than hide under a car, play dead, or keep hiding Nick decides instead to bolt upright and run, making him their latest target practice.  (I’ll give him a bit of leeway though given his fight-or-flight instinct likely kicked in.)

By the time the men stop their pursuit Nick’s way off the path, completely exhausted, and not even remotely close to any possible supplies.  He tries to eat a cactus, but throws it up.  Then he drinks his own urine and I nearly throw up.  After that it’s miles upon miles of trudging through the wilderness, his strength slowly draining, until he basically passes out.  Eventually he wakes up with two starving dogs about to make him their next meal.  One takes a hunk out of Nick’s leg before he can fend them off and get atop a burnt-out structure.  The racket draws a small herd of Infected, which the dogs decide are easier to eat than Nick…sadly for the dogs, the Infected decide the same.  Gunfire and car horns draw the herd away long enough Nick’s able to drop down, eat some sloppy seconds of dog (is that wise after Infected have eaten the meat??), and bind his leg with a spare Infected’s belt.

He eventually catches up with the mini-herd, blends in, and runs into the gunmen again; this time continuing as Infected are picked off for sport around him.  Upon recognizing Nick one gunman gets flustered enough he spills his ammo and, rather than getting to safety, tries to collect the bullets.  The decision results in his and one other gunman’s death…the third being the only one smart enough to just take off.  Only now do we see that Nick’s being watched by others — two men and a woman named Luciana — but they do nothing under Luciana’s orders.

Soon Nick passes out again, seemingly for good, before rain revives him.  Eventually he reaches Tijuana (maybe??), which is eerily quiet and Infected-less if you ask me.  He finds a drug store, there’s nothing, he continues to a barbershop, works to bandage and ducktape his wound, and finally reconnects with Luciana and her men.  They bring him to a doctor who properly cleans and bandages his wound before opening a door to reveal Nick’s been brought to a makeshift community of survivors in the hills of Mexico.

Throughout this episode there are brief flashbacks to Nick’s stint in rehab prior to the end of the world.  While that’s vaguely interesting – we find out how he met Gloria (the first Infected on the show), that they were truly close, and she was from a wealthy family – what I found most intriguing was the information we get about Nick’s father…and what inferences can be made from it.

Nick tells Gloria he can’t confront his father during Family Day therapy out of concern for the man’s feelings, yet he does vent to her about his father always being tired.  So tired that he gets home and goes directly to his room rather than spending time with the family.  So tired that even when Nick makes the effort to engage, his father seems unwilling or unable to reciprocate.  While this could be simple exhaustion, it could also be a sign of depression…a possibility I feel is underlined when Madison tells Nick that his father died in a head-on collision.  True, the man could’ve fallen asleep at the wheel, but it’s also possible (and far more intriguing a thought) that Nick’s father had committed suicide.

If I had to guess I’d put my money on Nick’s newfound sanctuary lasting for, like, three weeks, tops…It’s just The Walking Dead universe way.  It’s hard to say with any certainty what’s up for next week, but I hope we catch up with the rest of the Abigail crew and that they’re having a better time in Mexico than Nick.  Seems unlikely, but one can hope, right?