Flipism: Of Villains & Their Love of the Coin Toss

The latest season of House of Cards had a cold open in which Frank Underwood briefly explained the concept of flipism: the belief that all decisions can, and should, be made with the simple flip of a coin. Frank discussed the birth of the ideology and suggested it be used to clear up the chaos he created in the latest presidential election. He’s not the first villain to speak in favor of flipping a coin, of using chance, as a way to make a final decision…in fact there’s a history of antagonists both promoting and using such tactics throughout pop culture.

Frank discussed the concept of flipism as it relates to the Disney comic from 1953 involving Donald Duck called “Flip Decision”. In the comic the duck comes across a con artist, Professor Batty, who pushes the idea that the flip of a coin can aid Donald in making all the decisions in his life.

Life is but a gamble! Let flipism chart your ramble!

For a dollar Batty offers up a book on the ideology and lifetime membership in “the great society of flippists”. After Batty’s own coin flip decides Donald must make the purchase the duck reads the book, takes it to heart, and quickly begins making every decision, big and small, with a flip of a coin.

Unsurprisingly this leads Donald to a great number of misfortunes that include getting stuck in mud, lost on highways, and court proceedings that result in a fifty dollar fine by a judge for letting a dime do his thinking. Towards the comic’s end Donald has been thoroughly put off flipism and goes in search of the man who’d sold him a bill of rotten goods, but of course Batty has disappeared. After tracking the charlatan down to one of two apartments Donald tosses the coin one last time to decide which to check and, as if to underline his foolishness in leaving his life to chance, it leads him to being accused of two-timing by Daisy. Donald Duck found flipism caused more problems, more chaos, than it ever could have solved and gave it up both to his own relief and that of everyone around him.

Two Sides Of The Same Coin 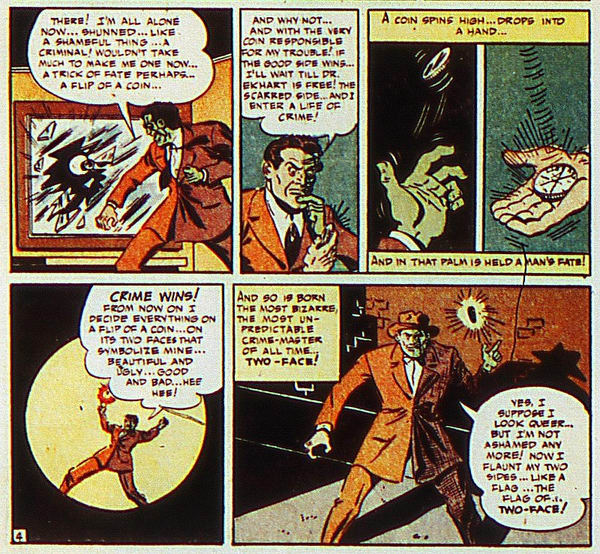 The first true character to introduce flipism to the world is none other than its most famous user…Batman’s Harvey “Two-Face” Dent. Even in his initial appearance in August 1942’s Detective Comics #66 Harvey (whose initial last name was Kent) is flipping his coin to decide the fate of Batman and numerous others.

After the mobster, Moretti, throws acid in his face during a trial Kent is left with disfiguring scars and the key evidence in the case – a two-headed coin favored by the mobster. Slipping into a crisis of both identity and conscience Harvey questions who is he, if not the remarkably handsome district attorney he once was, and why such a terrible thing had to happen to him. His ultimate conclusion is that it is all because of Moretti’s coin and, after gashing one side, it will be this coin that decides the fate of both himself and everyone around him. With the flip of a coin Harvey goes from victim to perpetrator, from keeper of the peace to causer of chaos.

Fate And The Coin

No Country for Old Men antagonist, Anton Chigurh, is almost the personification of Fate: cold, indifferent, with a chaotic randomness to him. While much of the time Anton kills using his own twisted sense of morality, when he grows conflicted he leaves it to a coin toss. While the basic concept is the same – a flip of the coin makes the decision – Anton’s method seems to deviate slightly from the other two discussed.

Both Donald and Harvey designate the meaning of the two sides, both of them make the call, while Chigurh is more removed. In true Fate form, the meaning of the two sides is known only to him, but the call is made by those it will affect most. He forces others to choose their fate, sometimes without hint of what it could be, and follows the decision of the coin without further deliberation.

Chaos Beyond The Coin

In 1971 The Dice Man was published in which the main character, a psychiatrist named Luke Rhinehart, grows bored and disenchanted with his life and begins to allow chance make all his decisions…this time in the form of a roll of the dice with each number designating an action to take. What starts as an experiment, a search for freedom and excitement, quickly turn into a chaotic life of sex, murder, rape, and a seeming cult following in Rhinehart’s dice-wielding footsteps. A man who starts off an academic everyman becomes a manipulative criminal by letting chance bring utter chaos into his life and the lives of those around him.

While the other antagonistic characters discussed spread their chaos throughout their own world, Rhinehart was able to carry it into ours. Over the years since its publishing The Dice Man has inspired more than a few real world people to use dice in their decision-making. Mogul Richard Branson confessed to using the book’s “teachings” when selecting bands to sign to Virgin Records, entrepreneur Jeremy King opened a series of restaurants due to his use of dice, and a number of other writers (including Danny Wallace, whose memoir, Yes Man, became a film by the same title starring Jim Carrey) recorded their ordeals in letting the roll of the dice decide their fates after reading this book.

Given many villains are agents of chaos it makes sense they might gravitate towards flipism and similar forms of decision making – rolls of the dice, spins of the wheel, spins of a gun chamber. These methods are all, in their ideology, based on fate, on chance, on nothing more than luck and, more often than not, their results cause more harm and havoc than they solve.