4 Key Reasons Why Children in Horror Are Terrifying 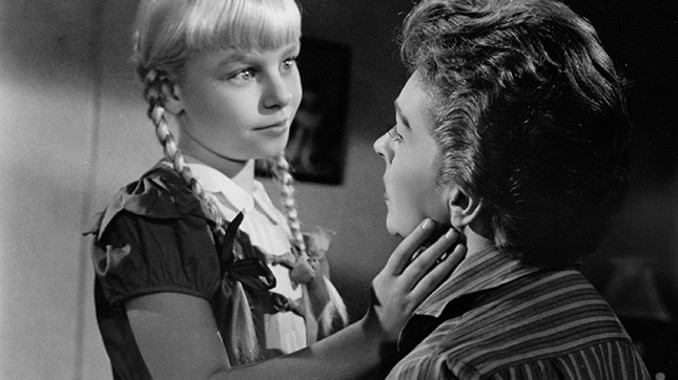 From The Exorcist‘s Regan to Orphan‘s Esther and literally all those kids from Children of the Corn and Village of the Damned there’s something downright disturbing about the children in horror movies.  Whether simply victims of circumstance or outright antagonists nothing makes the skin crawl like a dead-eyed child destroying everything in their path or, worse yet, a delighted one giggling as they murder.  The question is, why?  Why is it that, more than freaky monsters and cold-as-ice serial killers, do tiny tots with smiles and eyes all aglow strike us as utterly terrifying?

Children are the ultimate symbol of innocence; they are trusting, unconditionally loving, and untouched by many of the darker aspects of the world.  With soft features, chubby cheeks, and wide eyes a great many look downright angelic (especially in shows and films)…and angels shouldn’t be telling priests that their mothers suck c**ks in hell.  Nor should they be the son of Satan, personification of sin and all that’s evil in the world.

The possessed or demonic child represents the idea of a violent, aggressive, loss of innocence, which is deeply upsetting.  It can suggest the idea that, no matter how hard a parent tries to protect their beloved child, something can happen.  Something out there can take, destroy, their child and whatever purity they have.  For anyone that’s pretty scary, for a parent it’s more so…then add the child turning on them and it’s horrifying.  It symbolizes a loss of hope and control to the audience, both of which are very troubling concepts.

Even the most innocent child can have their wicked moments, it’s just the kid way.  Childhood is about learning, then testing, the limits of acceptable behavior.  As youngsters grow they can show themselves capable of taking things that aren’t theirs, mistreating animals, and throwing destructive, even violent, fits over any number of minor issues.  So, in the end, the idea of a child doing something next level evil isn’t completely unbelievable and that’s a unsettling thought.

Twisted monsters and freakish aliens are not something you’ll ever meet in your daily life.  Even psycho slashers and ice-blooded serial killers are rare finds for the average person.  But a toddler throwing themselves on the floor, screaming, kicking, and biting their parents?  That’s just another day at the toy store.  Horror movies merely take it a few steps farther to imagine a knife or rock in the swinging fist of that child currently losing control, but those extra steps lead to shivers down the spine…after all, it’s impossible to say something similar could never happen.

You Suck As A Parent

Most children come out of their terrible twos (to teens) without much harm done, but when that doesn’t happen people immediately look at the parents.  What did they do wrong?  What didn’t they do right?  What sort of terrible parent raises a child capable of murder; how bad was the parent who ended up dead at the hands of their child?  The idea that you’re unable to raise your children into functioning members of society is a normal parental fear and horror plays on that.

Every parent fears, no matter how hard they try to raise the next generation into greatness, they’ll raise someone not just uncivilized, but downright dangerous.  What is a parent to do when their little darling is, in fact, a murderous little monster that can neither be calmed nor controlled?  Everything they thought about themselves as a parent is thrown into question and doubt.  The idea that a child will grow increasingly volatile and violent, no matter how much love or discipline they get, brings terror to every caregiver out there.

Whether possessed or just born that way when children turn on adults, especially their own parents, an unsettling feeling develops deep in the gut.  It’s simply not the natural order of things, not how society functions.  Not even in the animal kingdom is it the norm for offspring to attack and kill their parents – aside from certain spiders, in which the mother intentionally allows her children to eat her (yikes!).

The basic laws of nature indicate (and often reinforce) that bigger, stronger, creatures cannot be overcome by smaller, weaker, ones.  The suggestion that this isn’t necessarily true, that you could be taken down by a tot half your size, is deeply troubling.  It opens up moral dilemmas that most are not prepared for: How do you protect yourself against something you never thought to fear in the first place?  What do you do when your instincts tell you to protect the thing that’s attacking you?  Would you, could you, kill a small child to save yourself and others?

Do you have a favorite creepy kid?  Which one’s so scary you can’t even handle it??

(Author’s Note: Video not mine.)